As you know I've been doing the crafting competition over at Just Between Friends. No lie, it's been a little stressful but also a fun way to get my crafting groove back after losing it when Phoebe came along. Here's the write-up I did for the sewing table along with some more information.

When I first opened the box and saw the Cricut Iron-on I had a moment of panic. I do not have a Cricut or other fancy cutting machine. I do have one nice pair of scissors and an x-acto knife.

When I can find it.

But since I have the scissoring skills of an angry third grader I knew I wasn't going to be able to do an intricate design.  As I was brainstorming I looked around my house and saw an old sewing table that my neighbor gave me about six months ago. 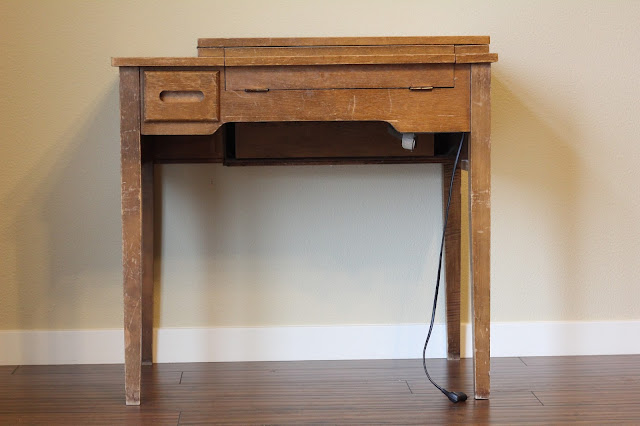 I had been thinking of painting it, staining it, trashing it (?), but had done nothing so it sat in the corner collecting dust and preschool projects. Light bulb. I'd been wanting to paint it for awhile now but just couldn't find the motivation to get going on it, plus I wasn't sure what color to do. The nice (and scary) thing about having to do a project in 4 days is that you don't get time to be wishy washy about design decisions. You pick something and you go with it.

So I chose Benjamin Moore's Coral Gables because I had seen it in a few other tutorials and because I have coral pillows on my bed that I love. 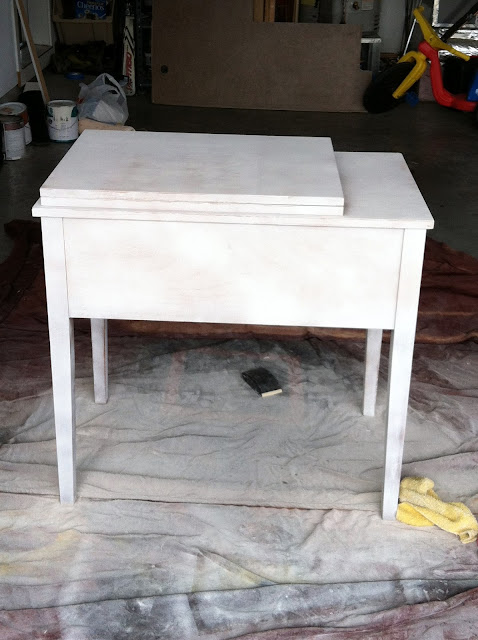 If you're looking to redo a piece of furniture I would recommend googling it before asking me because I still don't have a very good idea of how to do it. I'm probably not one to give advice at this point, although I will say that you should just make sure you have a nice smooth surface to paint on, which would probably require some sanding, and that you use a good primer. I used KILZ spray primer and it worked for me although I had to sand the grittiness away after priming. So I probably did it wrong. 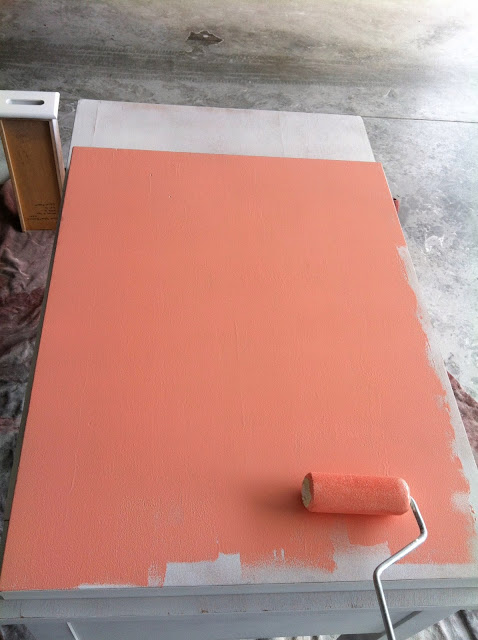 I used a combination of a brush and roller to get all my paint on and the guy at the paint store recommended that to help the paint cure faster I should take a blow drier to it after 24 hours. I did not. Probably a good idea though because if you set anything on latex paint before it's fully cured it'll dent. 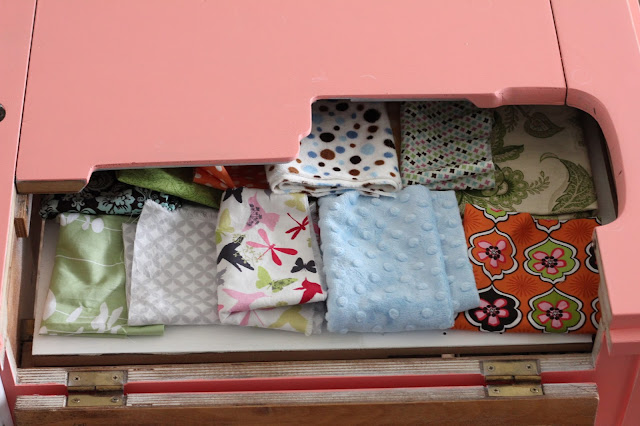 I discovered as I was going through the refinishing process that the 70s style sewing machine that this table was made for was a far different shape than my machine. It won't ever fit. So in the future I’ll just put my machine on top of the table when I’m sewing and use the inside to store fabric scraps. I took out some of the hardware inside then sanded and painted the wood to give myself a nice little shelf for storage. I may change the function of this shelf when I have a chance to really use the table but it works for now. 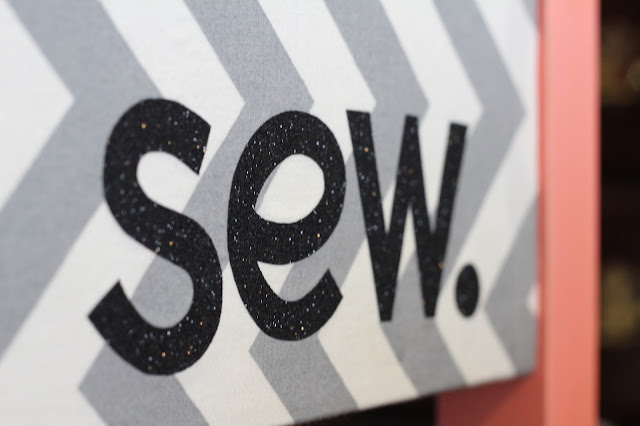 Finally, for the perfect touch of bling? The glittery iron-on film which I ironed on to my fabric before Mod Podging it to the front of the table. I printed off “sew.” from my computer, cut the letters out of paper, traced them onto the film, and then cut them out with scissors. 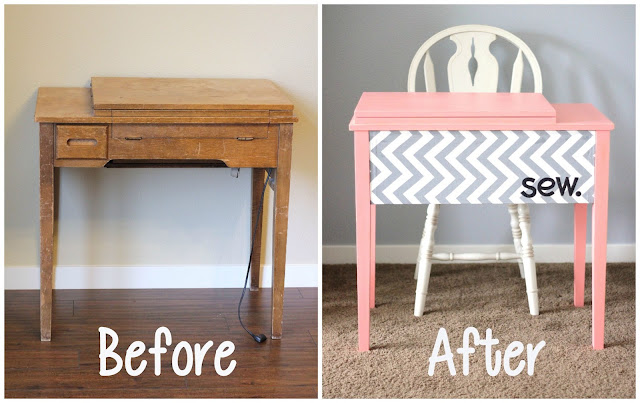 In retrospect I probably should have written “sew what?” since it represents my general attitude towards sewing and my disregard for half the instructions that come with every project. I’m sort of a rebel. A rebel who likes puns and has crookedly sewn curtains. 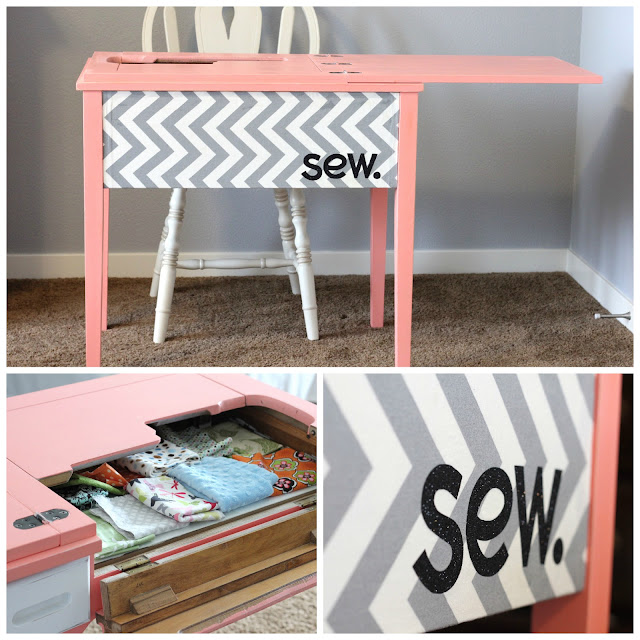 All our crafts are up at Jonie's blog! I've been working hard all week (as has everyone else I'm sure) so I hope you love the projects and can decide which ones to vote for. So scary! Have fun checking out everyone's projects at Just Between Friends!

Well, I'm already off track for blogging every day in May.

But! It's for good reasons.

1. We've had amazing weather and the kids and I have been outside non stop having fun and making memories. How can I make all of us come inside for things like cooking (we've been eating hot dogs) cleaning (can't remember the last time I mopped) and blogging (why do I start challenges I can't finish)?

2. I have been given an amazing opportunity to participate in a little something called Blog Wars over at Just Between Friends.

AAAaaaaahhhhh! I'm freaking out a little bit. I entered on a whim, after a little persuasion, not really thinking that I would get picked. If there was ever incentive to get back into crafting and find my groove again, this is it.

So. You should check it out, we start next week, and go vote! The projects will be anonymous but you'll know mine because it will be the coolest.

Actually, I shouldn't really joke about that because I scoped out the competition, and... they are really creative and super cute girls. Dang it! My plan is to just try my darndest, hope for inspiration, and try not to have a mega craft fail during my 15 minutes of fame.

P.S. the prizes are AMAZE and with that comes a little disclaimer: I am aware that if I am the winner of Blog Wars that I will be responsible to pay taxes on the camera provided by familyshare.com.

I can't even imagine winning a prize big enough to require taxes. Ooo! 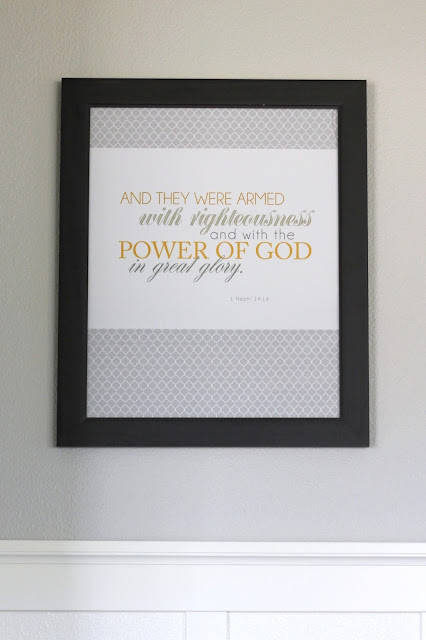 "And they were armed with righteousness and with the power of God in great glory." 1 Nephi 14:14

This is a quote from the Book of Mormon* which, as a member of the LDS faith, I believe in along with the bible.

I love this quote because it is about us, right now, and it conjures up a picture in my head. A picture of my children going out into the world with an invisible shield of protection around them because I taught them of God and of Christ. Of them being examples of kindness to their friends. Of sweet kids who aren't afraid to stand up for truth and righteousness. Of rooms that light up as soon as they walk in and people who become better just by knowing them.

Of perfect children. Basically. Too much to ask?

My visions are unrealistic (my babies may or may not sparkle with goodness in my dreams) but having this quote hanging in my house reminds me that to even a chance at this for my family it is up to me to teach them here in my home. And gosh darn, I'm going to try my best. Because there is some scary stuff out there.

*{if you ever want a Book of Mormon you just let me know and I'll get one to you. seriously. i'll send it wherever}

Things that make me uncomfortable

The prompt for today's challenge is "things that make you uncomfortable".

Apparently, so many things. The rough list in my head was getting huge so I scrapped it and decided to just list a couple things for you.

1. I am turning 30. Soon. The fact that I can even say that shows progress for me because a couple months ago when Logan asked how old I was going to be I could barely spit it out. I do not want to be 30. I have never had a problem aging before, but for some reason this new decade is totally freaking me out. I liked my twenties. They were fun! 30 just seems so... adult. Weird that a number makes me feel old but having a mortgage and two kids doesn't.

2. I hate having my face touched. I don't know where this weirdness comes from, but if anyone even gets close to touching my face I get super twitchy. Even if it's Logan. Or Tyson! So, please don't touch my face. At all. For reals. Guess that's where I draw the line at personal space.

I'm on day two of this challenge and already stumped. I'm supposed to educate you on something I know a lot about or am good at.

I know a lot about my kids. So I'm going to share a little Logan tidbit with you and let that be it for the day.

Yesterday we were playing outside when Logan walked up to me with his hands splayed and showed me fingers porcupined (now a verb) with splinters. Like, 50 splinters per hand. So he stood next to me while I pulled splinters out, wincing here and there, when suddenly he gasped.

"Momma! You got the splinters all in you legs!"

No more wearing shorts without shaving.

So, I want to blog again. And I couldn't think of how to jump back into it until I came across a blog every day in May challenge from Story of my Life.

The challenge for the first day is to write your life story in 250 words or less.

Well, I don't want to write my life story so I'm going to condense what's been going on with me the last 8 months or so in the next paragraph.

It seemed like a lot of things happened at the same time. My grandma died, we took a stressful road trip to Utah for her funeral, and my doctor took me off of my thyroid medication all at the same time. Oh, and my baby was only two months old. By the way. I was extremely anxious during our trip and even after we returned home I could not let go of my anxiety. It was paralyzing. I could hardly leave the house and even having people over to our place would make me so stressed I thought I was going to throw up. After some blood tests and a few doctors visits we decided I had some postpartum depression as well as hashimoto's disease. All of this contributed to my mental state and it has been a slow process trying to get my thyroid medication right and see if there is anything I can take (while nursing) to ease my anxiety.

But things are getting better. The depression has all but disappeared, the anxiety is becoming less frequent, I'm starting to feel like I can do the things I love again, and actually enjoy them instead of inwardly freaking out. Sometimes :) It's a process, but there you have it.

So. What's new with you? 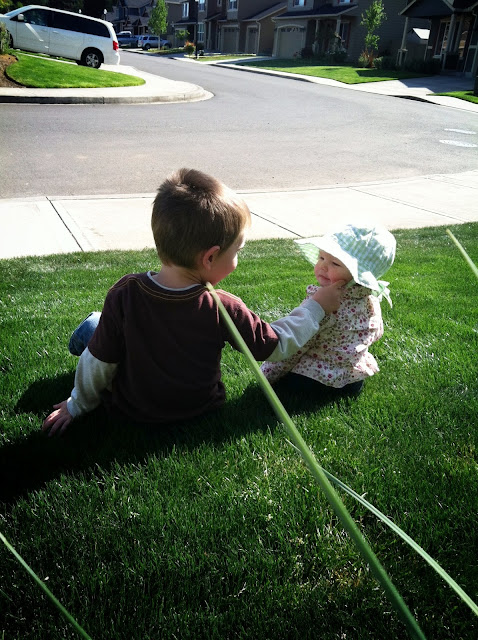